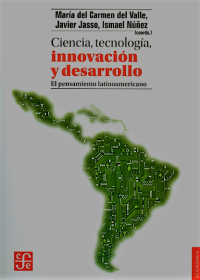 Purpose: The purpose of this paper is to review the contributions of what has been established as Latin American thought, as science, technology, and innovation (STI) in Latin America have been strongly related to development. Design/methodology/approach: The analysis method is based on the review of a group of Latin American and Latinoamericanista (Latin Americanist) authors who were selected on the basis of their contributions to the explanation and proposals of public policy related to STI. The following are some of the questions that guide the analysis. How much has STI in Latin American thought contributed to the development theory? Given the fact that there are other dominant mainstreams, can we say that Latin American thought is still relevant? Findings: The main conclusion of this work is that Latin American thought is still applied to current Latin American development discussions. This can be proven by the creation of particular concepts and analytical frameworks such as structural heterogeneity, development styles, authentic and spurious competitiveness, Sabato’s Triangle, the centre-periphery model, and STI policy practices. Originality/value: This paper gathered contributions and categorised them into three dimensions: state participation (intensity, composition), industrialisation as the impulse for development, and instruments and public policy actions that can be implemented or have already been implemented.